On Thursday 25th May, Wallaroo hosted the field day for the Koori Fire Sticks workshop. This two day event was put together by Den Barber and his great team from LLS. There were over 80 people in attendance from many areas across Sydney, including RFS, (special thanks to Tony Gray Cumberland Zone RFS), councils, individuals and a large contingents of Green Army participants were also represented. 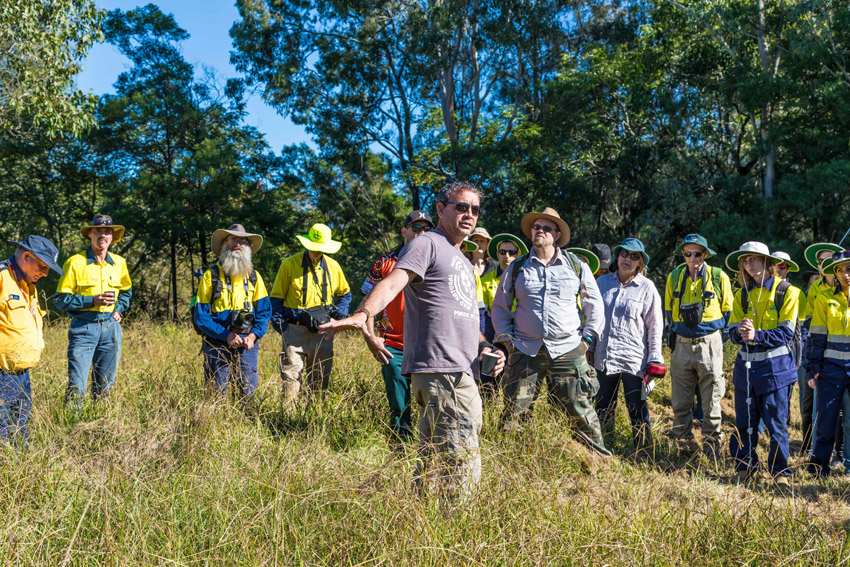 Victor explaining the principles of a ‘cool burn’

They were not let down! Victor Steffensen, a tribal elder from Cape York was so enthusiastic as he explained with a depth of passion to the participants, the concepts behind the ancient practice of ‘Cultural Burning’, which as he expressed should be carried out using only ‘cool burns’.

This is fire that doesn’t burn or scorch the canopy, rather the smoke in cultural belief helps cleanse the canopies foliage and aid’s in tree health (may well help with the psyllids on "Grey Box" at Wallaroo). Victor went on to describe the practice of bringing country back to a healthy state, offering advice on how to reduce the Bursaria spinosa ‘Blackthorn’ thickets by first cutting them down, then spreading across the ground and again burning the area with a cool burn, thus bringing back the grasses. He further described the differences in the drying or curing times of introduced pasture grasses and native grasses and how over time you can favour and encourage native grasses to dominate once again.

All the participants were made busy lighting small circular fires in the open grassland area, and of course feeling that connection to country (very exciting). Hopefully now that the Bushfire Management Plan is complete, we will begin to implement fire as an ecological process and be one of many supporting recovery tools.

This was a great opportunity to showcase CLC and of course tell the story of what we are about. A handful of people came up to me throughout the event, enquiring of more detail, very pleasing!